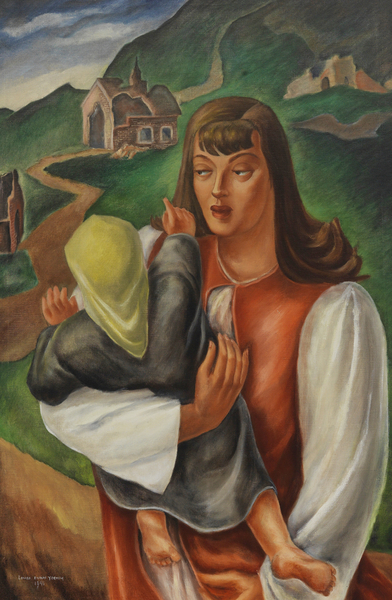 Louise Dunn Yochim was born Luba Dichne in Zhitomir, Russia in 1909. She immigrated to Chicago, along with her parents and four siblings in 1924. Yochim studied at the European Gymnasium and at the Art Institute of Chicago, receiving her Master’s Degree and Doctorate (1962) in Education from the University of Chicago. She was married to notable Chicago artist Maurice Yochim. Yochim exhibited at the Art Institute of Chicago, the Renaissance Society of the University of Chicago, Chicago, IL, the Union League Club, Chicago, IL, the University Club of Chicago, the Cleveland Museum of Art, among others, becoming one of the leading women artists in Chicago. She began her career as an art teacher at Steinmetz and Wells high schools in Chicago and eventually became the Superintendent of Art for the Board of Education of Chicago. Yochim published three books, the most notable being “Role and Impact: The Chicago Society of Artists”, a tome much-used by galleries today. Her artwork can be found in the collection of the Art Institute of Chicago. In 2003, she died in Skokie, IL at the age of 94.