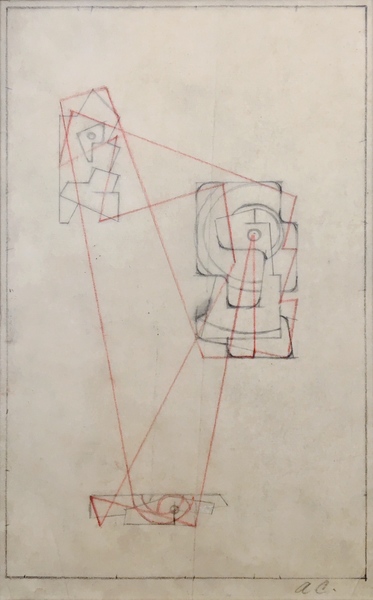 Born in Lyon, France in 1908, Alexander Corazzo originally studied music and civil engineering. In 1927, after his arrival in the United States, he studied art at the St. Paul School of Art in St, Paul, MN. In 1935, he and colleague R. Leroy Turner became one of only a few Americans to asked to join the important Abstraction Creation Group in Europe. In 1937, he attended the New Bauhaus in Chicago, but left after one year due to a falling-out with founder Laszlo Moholy-Nagy.

In 1946, he was awarded an architecture Degree from the Illinois Institute of Technology, where he studied with Mies van der Rohe.

At the age of 63, Corazzo died in Valparaiso, IN in 1971. The University of Michigan Museum of Art held a retrospective of Corazzo’s works in 1976. His friend composer John Cage contributed a poem for the show catalogue.