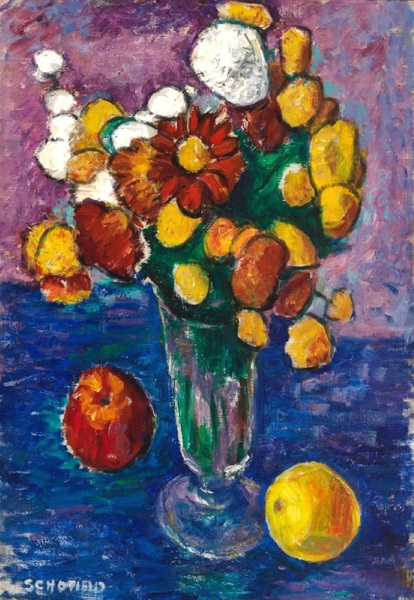 A painter, print maker and sculptor, Flora Schoenfield (Schofield), was born in Lanark, Illinois in 1871. She studied at the School of the Art Institute of Chicago and taught Saturday classes there until 1904. Schoenfield also studied with Charles Hawthorne, B.J.O Nordfeldt and William Zorach in Provincetown, Massachusetts. She studied with Albert Gleizes, Fernand Leger and Natalia Goncharova in Paris, France.

In 1923, Schofield’s abstractions caused a split at the venerable Chicago Society of Artists. When her artwork was was accepted by the jury, the notable Impressionist painter Pauline Palmer and the notable Modernist painter Carl Hoeckner got into a row that ended-up splitting the group. The Impressionists then broke away into their own organization called the ”Association of Chicago Painters and Sculptors”.

Paintings by Flora Schofield have been exhibited at the Pennsylvania Academy of the Fine Arts, Philadelphia; the Salon d’Automne and Salon de Independants, Paris; the Salons of America; the Society of Independent Artists, New York; the Wichita Museum of Art, Wichita; Gallery Carmine, Paris; the National Arts Club Galleries, New York; Marshall Fields Galleries, Chicago and at the Museum of Modern Art, New York.

Schofield’s work is in the collection of the Detroit Institute of Art, Detroit.