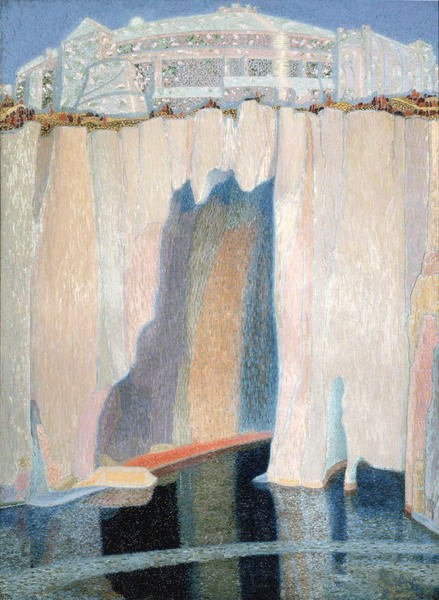 Gordon St. Clair was born in Veedersberg, Indiana in 1885. St. Clair studied at the Art Institute of Chicago and worked throughout his life as an artist, illustrator, critic and writer. He lived in the noted Tree Studios artist colony in Chicago in the nineteen-teens. In 1921, he, along with Rudolph Weisenborn, Raymond Jonson and Karl Hoeckner, formed the “Salon des Refuses” to protest the Art Institute’s rejection of non-mainstream artists. In the 1930s, he wrote scripts for a popular network NBC radio program called “Tale of Today” and contributed to many art and literary journals of the day. From 1929-1942, he was the art director of World Book Encyclopedia. St. Clair exhibited at the Art Institute of Chicago, the Pennsylvania Academy, Philadelphia, PA and was a member of the Chicago Society of Artists, Palette and Chisel Club and the Artists Guild of the Fine Arts Building, Chicago, IL. He died in Glen Ellyn, IL in 1966.

“Xanadu” was exhibited in 2004 at the important final exhibition at the Terra Museum of American Art, “Chicago Modern, 1893-1945: Pursuit of the New”, The painting is fully illustrated in the museum exhibition catalogue on pg. 145.