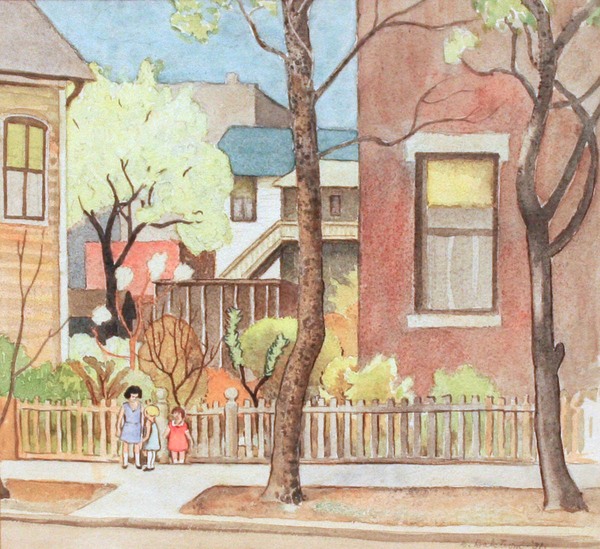 Born in 1893 in the town of Visby on the Swedish island of Gotland, Gustaf Dalstrom immigrated to the United States in 1901. He lived between Chicago and Manistee, MI in his youth, with an aunt who was a seamstress and uncle who was a lumberman. Dalstrom attended Lane Technical High School in Chicago. One of his first jobs was as a clothes cutter for a wholesale tailor and uniform maker, Ed V. Price & Co. He began his studies at the Art Institute of Chicago during this time, but was interrupted by WWI. After his service, he resumed his studies at the Art Institute of Chicago and worked for Faithorne Engraving Company making posters. Dalstrom studied at the Art Institute of Chicago with George Bellows and Randall Davey. He spent two years working for an engraving company in St. Louis before returning to Chicago and marrying fellow artist Frances Foy in 1923. In 1928, Dalstrom and Foy departed for a grand painting tour of Europe, where they stayed in Ernest Hemingway’s apartment in Paris. Also, in 1928, Dalstrom, Foy and fellow artist friends V.M.S. and Hazel Hannell, Frances Strain, Fred Biesel and Emil Armin founded a group called “10 Artists of Chicago”. Best known as a muralist, Dalstrom was a supervisor for the mural division of the WPA and Administrator for the Illinois Federal Art Project. Some of Dalstrom’s mural projects include the Haishe Memorial Library, DeKalb, IL (1934), “Illinois Farm” for the Gillespie, IL post Office (1935), State Hospital, Manteno, IL (1936), “The History of Transportation” for the Lawson School, Chicago, IL (1937), “The Great Indian Council -- 1833” for the Chestnut Street Post Office, Chicago, IL (1938) and “George Rogers Clark Conferring with Indians Near Herrin” for the Herrin, IL post office (1940). In 1927, Dalstom became president of the prestigious Chicago Society of Artists. He exhibited at the Art Institute of Chicago 45 times between 1919 and 1949, winning a gold medal for excellence in 1946 and the important Logan Medal in 1948. He also exhibited with the Society of Independent Artists in New York, the Chicago Society of Artists, the Renaissance Society of the University of Chicago and the No-Jury Society of Artists. He exhibited at the Whitney Museum, New York, NY, and the Museum of Modern Art in New York purchased his entry from the 1939 World’s Fair in New York. Later in life, Dalstrom served on the staff of the Field Museum of Chicago, where he designed exhibits. He died in Chicago in 1971.