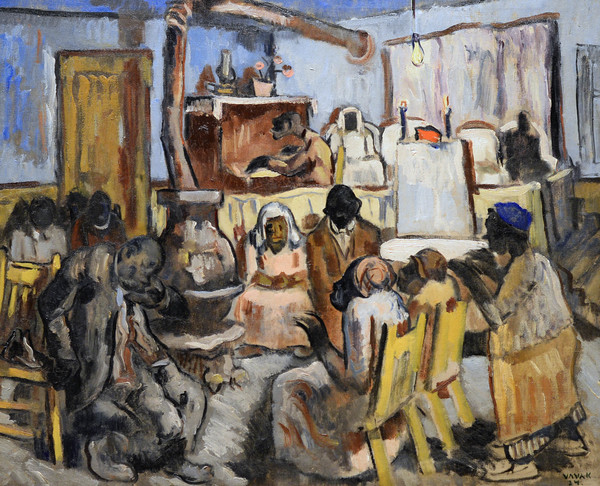 Joseph Vavak was born in Vienna, Austria in 1891. Vavak and his family immigrated to the United States in 1904 and settled in Chicago. Vavak studied at the Art Institute of Chicago from 1908-1916 and studied with Alphonse Mucha. Vavak also studied at the Art Student’s League in New York and in 1929 went to Paris for further study. He served his adopted country in WWI. Vavak exhibited at the Art Institute of Chicago 33 times between 1914 and 1945. He also exhibited at the Whitney Museum of American art in New York.

Besides working as an artist, Vavak supported himself as a musician, playing both violin and piano. In an excerpt from a 1934 letter, Vavak states, “Motivation must come from outside one’s self. External conditions, economic and physical, have been so acute during the past few years they have compelled even the average minded student to a personal investigation. Although these are lean years for a poor man’s stomach they are at the same moment rich harvest years for the creative urge.” Vavak’s surroundings clearly made an impression on his craft. Although he began his career as an Impressionist painter, he developed into a social realist artist.

Vavak has six works in the Smithsonian American Art Museum in Washington, DC, including the notable painting “Women of Flint”, which depicts women workers and wives of workers who stood up to the police and the National Guard at the massive sit-down strike against General Motors in 1937. Other Vavak works are in the Art Institute of Chicago, the Portland Art Museum, Portland, OR and the Frederick R. Weisman Art Museum in Minneapolis, MN. Vavak was also a mural painter for both the PWAP and the WPA. Vavak retired to Hume, MO in the Ozarks where he died in 1969.